The past week has been much of a muchness as far as the set up of the course goes; 3 days in school, 1 at the Hub and 1 at Uni.

I spent a large proportion of my time in school planning and re-planning my Year 10 topic for my first 2 weeks of my block placement. I kept going back and forth with my mentor, improving things and getting feedback, as she knows the class a lot better than I do at this point. I think I now have a solid plan for Year 10 though, so it was well worth the time.

I also taught starters/plenaries to each of my classes, either teaching them the basics of a topic before the host teacher took it further with them, or trying to deepen their understanding afterwards!

With Year 10 I did fractions of amounts, which was revision but I was very glad I’d given myself an option of 2 different bingos – 1 was a harder one I had done myself and another was from MathsBox. They struggled with the examples we did together, so we ended up doing the easier one from MathsBox to practice our skills, rather than put it in a problem solving context and confuse them further! I think it went down well, especially as I gave out prizes too.

Later in the week I did a plenary with them on multiplying and dividing fractions. We did a ‘Convince Me’ Tarsia, which was something we were told about in our Hub session a few weeks ago, and is championed by Mr Barton. See the ‘Twists’ section of this page for an explanation of this and may other ways to use Tarsia’s as ‘rich’ tasks, not just jigsaws! In 2s/3s they worked really well, finding the things that were wrong and giving me really convincing explanations as to why, even coming up to the board to tell each other about them. It’s definitely something I would use again, but I’ll have to make sure to watch that group at the back!

With Year 8, my first starter covered factors and multiples. We first did some examples and talked about the definitions, and then went on to some problem solving exercises like this one:

The Year 8’s are set 2, so found this problem solving aspect a little more interesting than just listing factors and multiples over and over again.

Later in the week I did a starter on prime numbers. I think this lesson was the highlight of my week. It was the first time I have come out of a lesson and, instead of breathing a sigh of relief, genuinely smiled and been happy with the progress they made.

I started with an ‘I like/I don’t like…’ exercise. This involves thinking of a rule and getting the class to volunteer numbers. These then go in the column of ‘Likes’ if they follow the rule, and ‘Dislikes’ if they don’t, until eventually someone can guess the rule. I liked this because everyone was able to contribute, as even a ‘wrong’ answer contributes to finding the rule. I started with multiples of 4, then factors of 60, then primes! I was glad that someone in the class actually knew the primes was my last rule and was able to offer an almost word perfect explanation for what a prime number is. We then dealt with misconceptions, for example 1, 2 and 9. After this I asked the class to list all the primes up to 20 on their whiteboards – I got mixed responses and so wrote 1-20  on the board and asked ‘Is 1 prime? Is 2 prime? 3? 4? …’ crossing out those that aren’t prime as we went along. The class were chanting ‘Yes/No’ in unison to this (except for 9, but me and the class going ‘oooooh!’ when a few said yes soon got them back on track!). I was absolutely buzzing.

This was a little bit of an extended starter, as I then used the Sieve of Eratosthenes with them to help them find the primes on a 100 square. I used this visualisation from Visnos, which is just beautiful!  It went down a treat, and the students crossed off the non-primes on their own squares as we went along. In hindsight, this colouring wasn’t the best at the time, as it meant some people weren’t listening to the next step totally, but it does mean they have a copy in their books now. They were also able to tell me that we could stop after we reached 13, as we were just ‘crossing off’ things we had already crossed off. By bouncing questions around the room I was then able to get them to explain that we could have stopped at 10, because 10×10=100 so we had already covered all the possible ways to get 100 at that point. I was absolutely amazed at them.

We then moved onto an investigation into prime decomposition; dividing any number we had crossed of the 100 square into any factors, then dividing these up until we could go no further. Then one pupil said ‘Miss, does this mean all numbers are made up of primes?’ and I swear I could have hugged him. YES, YOU MATHEMATICAL GENIUS, YOU! I didn’t hug him, instead I asked him to repeat it louder to the rest of the class, and said YES THAT’S EXACTLY RIGHT!!!!

They then moved onto prime decomposition and HCF/LCM from this with the Host Teacher and did it very well. She then emailed me over the weekend to let me know that not a single student had written that 1 was prime in their Unit Assessment on Friday, and that it was their best scored yet. I feel very proud of them, and of me. 😀

In the Hub session and at Uni this week we focussed on differentiation to make work accessible for the lowest and highest ability students, and those with SEND. I found this really interesting as I’ve always thought of differentiation exclusively as being ‘by task’, but I’ve now learned that things that are as simple as asking good questions, or setting an ‘open ended task’, with a place that everyone can start at regardless of the extent of their knowledge, are great ways of differentiating. In fact, I’d been thinking I was struggling with this but it turned out that I had been doing it already in a lot of my activities and questioning, which made me feel a lot more confident.

In the Hub on Thursday we came up with ways to extend tasks or ask effective questions for a few topics and had some very interesting discussions about it. Even with just 3 of us, we get an awful lot done and come up with some interesting things. 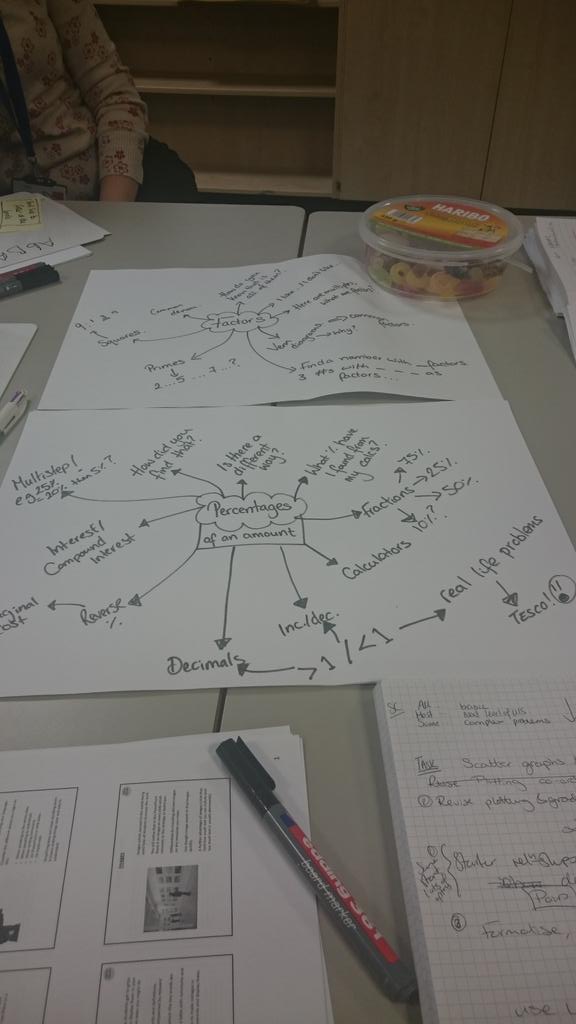 Friday also saw me get a tweet from Tom Bennet, TES behaviour guru/’Tsar’/advisor to the Government, having tweeted about his article in TES a few weeks ago regarding bullying that falls under the radar. I reacted like a 14 year old getting a tweet from One Direction. I am not ashamed.

As the icing on my cake to a wonderful week, I attended the #hudmtc, a mini conference for Maths teachers at Huddersfield Uni, organised by @SolveMyMaths. It was a really inspirational event, with sessions by Mr Barton himself, and the God that is Don Steward. I won’t prattle on about it too much as I’ve already written a million words as it is… but suffice to say, I learned an awful lot from all of the presenters, and Don Steward hurt my head, but in the best possible way. You can read more about the day on Twitter on various other blogs by clicking the hashtag above, or on SolveMyMaths’ blog (specifically the Don Steward section, but with links to others).

Basically, this week was busy and I am super tired. I made time for friends, going out for a meal with by boyfriend’s family and a ‘playdate’ with a some friends and their baby. The amount of foundation I used to cover the bags under my eyes for these 2 events is irrelevant….

But like every other week, I loved every second 🙂 I hope you are all loving it too!