So there’s week 2 done and dusted too. Time flies when you are having fun!

I was tempted to say that I was being sarcastic there, and I half was, but half wasn’t. Last week was educational, inspiring and exciting. But it was also chaotic, noisy and tiring.

I spent my Primary Placement week at a local feeder school. It’s a teeny little one form entry community school, pretty much serving the few streets surrounding it. Everyone in it knows everyone else in it, all the parents know the other parents and all the teachers know every pupil’s name. It was a lovely place to be, with a real community atmosphere and feeling of togetherness.

This immediately worried me for the Year 6’s because I was here to think about their transition to Secondary. The Secondary they’ll be going to serves the whole of their town, and despite its very similar ethos of celebrating the community and its diversity, it is huge. People usually describe the Year 6 to Year 7 transition as ‘Big fish in a small pond, to small fish in big pond’ and in this case that is so true. Infact, their Primary is more like a puddle and Secondary like the Pacific Ocean.

That said the schools really are trying to make this transition easier for them. They have replica planners as they will be given in Y7, regular interaction with staff from the Secondary for MFL and PE and will have a number of days spent at the Secondary as a class before the end of the school year. The pupils generally seem well aware of the protocols when they get there, including the behavior policy. It’s quite common to hear a teacher say “At **** that will not be tolerated. That would be a comment/detention/insert other punishment here”.

I don’t really want to wax lyrical about everything I saw and heard last week because most people reading this will have had their own experiences of Primary and, if discussions with my coursemates are anything to go by, they’ll have been very much like mine. However, I would like to talk through some of the things I learned, some of my highlights and my ‘low lights’. 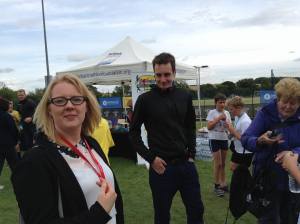 The whole week was an education. I learned a lot about the differences between Primary and Secondary, and how the transition between the two works. I’m hoping that this experience will affect my own teaching for the better, so that I am mindful of the challenges the children in the class have faced and how to be prepared to teach them in light of the new curriculum.

I had worried that I would come out of it thinking “Oh my god, I should have applied for Primary”. So many people had assumed that was what I was doing when I announced I was going to be doing teacher training, and I was worried they were right. But I can wholeheartedly say that I have made the right choice. I will be teaching a subject I am passionate about, to children who hopefully take less coaxing than kittens…

I hope everyone else had a wonderful week, with less headaches than my own, and you didn’t work too hard over the weekend. Personally, I ended up missing #mathsconf5 because I only had 3 functioning tyres on my car and wanted to fight off that cold! Instead I did a lot of shopping for work clothes with my student loan… Productive in some ways I guess…